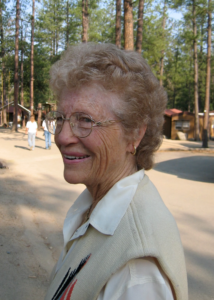 Jack and Bebe May with son Christopher, 1966

Bebe at left, with sisters Margaret (Peg) Kennedy and Frances Whetten. About 2010.

Jack and Bebe with their grandchildren, Megan and Nick May and Collin and Brock Taylor (center), Orlando, 2004

Jack and Bebe May at Friendly Pines Camp, about 2010

Bebe May, the owner and Director Emeritus of Friendly Pines Camp in Groom Creek, passed away peacefully in Scottsdale, Arizona, on May 19th, 2021. Her son and daughter were at her bedside.

Bebe was born Beatrice Kathryne Brown in Flagstaff, Arizona, on November 25, 1934. Her parents were Francis Valentine Brown and Mary Isabelle (Fuller) Brown, known as “Uncle Bud” and “Brownie” to generations of campers at Friendly Pines.

Isabelle Fuller Brown, her mother, came from a pioneer ranching family that helped found the town of Pine in the 1870’s. She was the daughter of Addison Everett “Ross” Fuller and Katherine Isabel “Kate” (Byers) Fuller, and through them was descended from seven of the passengers on the famous voyage of the Mayflower in 1620. Isabelle grew up on their cattle ranch in Long Valley, and could ride, rope and shoot as well as any cowboy. She passed a love of everything to do with horses to her daughter Bebe.

Francis V. “Bud” Brown, Bebe’s father, was a preacher’s kid from Yonkers, N.Y. His parents were the Rev. Francis T. Brown and Ruth (Sites) Brown. On the Brown side, they traced their ancestry back to Rev. Chad Brown, one of the founders of the Rhode Island Colony in the 1630’s. His mother’s family were German immigrants whose name was originally Seitz. Ruth Sites was born in Foochow, China, the daughter of Methodist missionaries, and spoke Chinese as her mother tongue.

Bud Brown graduated from Dartmouth College in 1925, but instead of becoming a minister or stockbroker as his family expected, he went out West to be a cowboy. He married Isabelle Fuller in 1930, but soon realized he would need more than a cowpoke’s meager salary to raise a family. He became a much-beloved teacher who taught history and economics in the Flagstaff and Phoenix schools, particularly North Phoenix High School.

Bebe, her parents, and her sisters and brother lived on a small ranch on Missouri Avenue, which in those days was a dirt road on the outskirts of Phoenix. As part of their contribution to the war effort in World War II, the Brown family provided entertainment and hospitality to the Royal Air Force cadets who were learning how to fly airplanes at Falcon Field in Mesa. The lads were brought out to their place on Missouri Avenue for square dances, hayrides, Sunday roast beef dinners, and horseback rides on the desert trails. One of the young British pilots, John Kenneth “Jack” May of Enfield, was a regular visitor to the Brown ranch. He struck up a close friendship with the family, being scarcely more than a boy himself. When his training was finished in the spring of 1943, and he was at the train station on his way back to England to fight the Luftwaffe, young Bebe cried bitterly at the parting. The story goes that Jack patted her on the head — for she was much younger than he — and soothed her by telling her to dry her tears, and if she was a good girl and he lived through the war, he would return one day to marry her.

By 1949, however, the dashing young pilot Jack May was only a dim memory. That year, Bud and Isabelle Brown bought a parcel of pine-forested acreage in Groom Creek from one Captain Mosse, a cavalry officer from New Zealand who had operated an equestrian academy on the site since 1941. They renamed the establishment Friendly Pines Camp, and so began a tradition of summer fun for children that continues to this day. Bebe and her siblings spent many summers at the camp, first as carefree campers and then as counselors helping their parents and learning the ropes of running a children’s camp.

Bebe graduated from North Phoenix High School in 1952. She attended Arizona State College in Tempe, now Arizona State University, receiving her degree in education in 1956. She taught in the Scottsdale and Phoenix schools, and also received a master’s degree in international business from the American Institute of Foreign Trade, where she learned to speak the Spanish language to a high degree of proficiency.

In December 1962, who should return for a visit to Arizona but the same Jack May, now the owner of his father’s small clothing factory in London, and still a bachelor. A Christmas party was already on the Browns’ schedule, and Bebe was enlisted to be his date. By the middle of the following year she was engaged to the handsome Englishman. They were married at the Church of the Beatitudes in north Phoenix on December 28, 1963, fulfilling the promise he had made twenty years before. For their honeymoon, they took the famed ocean liner S.S. France back to England, where they took up residence in Palmer’s Green, in far north London. Jack resumed managing the clothing factory and Bebe found employment in a Spanish import-export firm’s offices in London. Their son Christopher was born in 1965.

Back in Arizona, the summer camp business was booming. Bud and Isabelle were interested in taking on additional help, with a view towards their eventual retirement. They offered Jack and Bebe a position as assistant camp directors, with the option to buy the business. The little family pulled up stakes in England, and returned to Arizona. Not long afterwards, in 1967, their daughter Rosemary was born.

Bebe and Jack worked long hours at Friendly Pines, and by the 1980’s, they had become the sole owners and directors of the camp. For the next twenty years, they ran the business as a team, touching the lives of many thousands of children from Arizona and around the world. After Jack’s retirement in the early 2000’s, she continued as the Director of Friendly Pines for another decade, before taking Director Emeritus status and a pleasant new role as “Designated Kid Hugger”.

Bebe maintained a lifelong love of horses, particularly draft horses, and enjoyed trail rides in the forests of Groom Creek well into her 80’s. She was a committed Christian believer, a generous donor to many charitable causes, and a longtime member of All Saints’ Anglican Church. She served her community on the Yavapai County Planning and Zoning Commission for many years, and was a member of the Republican Women’s Club of Prescott. She was involved with the Western Association of Independent Camps and the American Camp Association. Bebe was an avid baseball fan and enjoyed watching Arizona Diamondbacks games on television and in person, especially when her children or grandchildren could join her. She traveled the world with her husband Jack, from Fiji to Portugal to Japan, and continued doing so after his death, visiting the Galapagos Islands with her sister, and England and Italy with her daughter.

In her last illness, she suffered from Multiple System Atrophy, a rare, incurable neurodegenerative disorder related to Parkinson’s disease that rapidly robbed her of the ability to walk, talk, and even to eat and drink and breathe as it progressed. However, she retained her mental faculties until practically the very end. When Friendly Pines Camp appealed to their former campers and counselors to send greetings to her at her care home, she eagerly listened as every one of the hundreds of cards and emails was read aloud to her, and almost always remembered some tidbit of information about the correspondents or their families. She tranquilly refused heroic measures to keep her alive when it became clear that her condition was terminal, but took great comfort in frequent readings from the Scriptures, with the sure and certain knowledge of life eternal through the sacrifice of Jesus Christ on the Cross.

Bebe is survived by her son and daughter-in-law Christopher and Barbara May of Scottsdale, daughter Rosemary Taylor of Scottsdale, granddaughter Megan May of Prescott, grandsons Nicholas May and Collin and Brock Taylor, all of Scottsdale, sister Frances Whetten of Cottonwood, and sister Margaret Kennedy of Cordes Junction. Her husband Jack predeceased her, as did her sister Teddy and brother Tim. She leaves behind a wide circle of friends and innumerable members of the Friendly Pines Camp family who will always hold her memory dear in their hearts.

A memorial service will be held at Friendly Pines Camp in October 2021. If her life has touched you and you feel inspired to make a donation to a worthy cause in her honor, the family asks that you consider the following:

Ready for The
Best Summer Ever?

Take the first step by requesting more info, or jump right in and enroll today.
Just use the links below to begin your journey for an amazing summer.